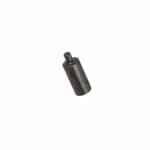 RBF features a reinforced tip that is 10% larger (0.102) than TDP spec (0.093). We don’t want RBF to be timed (as the case with a rectangular tip), so RBF retains the TDP buffer retainer’s versatile round tip, and is installed per TM instructions. 10% is as much as we could increase before encountering receiver extension timing incompatibilities.

When all the systems in an AR function properly, one could argue that a reinforced buffer retainer isn’t necessary. We agree, except mix and match parts from different manufacturers and their varying adherence to TDP specs, tolerance stacking is far from the exception. Many of us have had this inexpensive part break and toss its tip into the lower receiver, usually in the trigger group and cause a jam. RBF’s billet construction and reinforced tip aim to mitigate this, it could be viewed as cheap insurance, even if the way we make it is anything but cheap.

Note
* Always wear eye protection while handling springs under pressure, spring loaded pins and detents.
* RBF isn’t a fix for out of spec lowers with incorrectly positioned buffer retainer hole.  If you detect excessive wear marks on the buffer’s front face, it’s advisable to warranty exchange your lower receiver.
* Compatible with PWS Enhanced carbine receiver extension.
* Receiver extensions (REs) timing on the receiver can vary. While the an RE can rotate past dead center (with the RE covering and retaining the buffer retainer) by 45 degrees or more on one receiver, it might only be able to do 15 degrees or less on another. Also, different REs have different timing values.