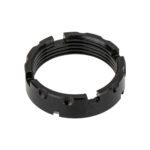 A subtle part with quite the significant upgrade!

Call us old fashioned, we like our castle nut staked to prevent it from rotating loose on the receiver extension and causing malfunctions.

Army manual calls for the castle nut to be torqued to 38 to 42ft/lb, and staked in two places. While we’re not in the “more is better, bigger is better” camp, there are times when less isn’t more.

The TDP spec castle nut is a simple and robust fastener that is almost perfect for the job it’s tasked to perform. Over the years, we’ve consistently come up with two minor gripes, first is its staking notches seem rather shallow and short, second is we don’t enjoy using the castle nut’s wrench notches as serrations (our fingers invariably find their way to these sharp cutouts) to rotate it towards to the end plate while installing it.

CNF (Castle Nut, Forward Controls) is based on the TDP spec castle nut, with couple of changes:

1. Staking notches angle changed from 45 to 30 degrees, this results in longer (25% longer than TDP spec) and deeper notches than found on TDP castle nuts.
2. Number of staking notches increased from 3 to 4, spaced equally on the CNF.  The castle nut is to be staked in two places, we’re not advocating staking in more than two places, CNF’s 4 staking notches mean that, at all times, 3 will be visible and available for staking, it simply gives the user more staking location options.
3. Coarse serrations on the wrench side of the nut, a single use feature to make it easier while rotating the CNF towards the end plate.

It is our opinion that a castle nut should be staked per TM, CNF’s longer and deeper notch reinforces the belief, that once installed and staked, it will not loosen without the user’s deliberate action. We love the idea of quick detach, but some things on an AR are meant to stay put, and considerable effort was made to ensure that by the original designers. CNF is a continuation and evolution in that direction.

CNF is billet machined in 4140 PH steel, and black nitrided. As with everything Forward Controls Design produces, it is proudly made in the USA.

We’d like to thank Ash Hess for letting us use parts of the Army/Air Force / Navy TM for CNF’s installation instructions, on the back of the card.

Click here to browse our entire selection of Lower Parts.