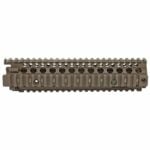 The rail of choice for MK18 clones

The Daniel Defense Rail Interface System (RIS II) was designed at the request of the United States Special Operations Command (SOCOM) for the SOPMOD II program.

Click here to browse our entire selection of Rails & Handguards.

Note: The rail’s paper packaging may have small tears from shipping and storage

There are no reviews yet.