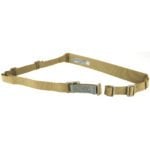 Developed with industry friend, expert, and former 1st SFOD-Delta operational member Larry Vickers and author of the Vickers Guide, the quick adjusting Tactical Sling used by the US Military.

The Patented Vickers Padded Sling combines with the tactical sling capability of the Vickers Sling with the added comfort of a padded rear section. The 2” inline pad doesn’t move up or down the sling and is made from closed cell foam that won’t separate or gain water weight. The front section with the Quick Adjuster allows the user to instantly lengthen and shorten the sling – quickly transitioning from a “hands-free” carry to a shooting position with a simple pull of the Adjuster.

Able to quickly transition from carrying a slung rifle comfortably to combat ready, the patent pending Quick Adjuster has bridged the gap between the two primary uses of weapon slings – from transporting to fighting. All Vickers Padded Slings™ are built with precision and pride right here at home in the US with superior materials.

The all new Nylon Hardware version features all newly designed DuPont Zytel® nylon – which is lighter, stronger, and more flexible than traditional plastic sling hardware. The majority of the BFG slings shipped to the US Military feature Nylon Hardware.

The 2” inline pad doesn’t move up or down the sling and is made from closed cell foam that won’t separate or gain water weight.

There are no reviews yet.